GLENDALE, Ariz. – Arkansas-based Sticks Baseball Academy advanced each of the three teams it sent down to the desert this weekend into the semifinal round in their respective age-divisions at the PG West MLK’s, and was able to grab glory from its middle child.

The No. 2-seeded Sticks BA (6-0-0) were locked in a 2-2 tie with the No. 5 Trosky Baseball USA (5-1-1) after 4 ½ innings, but pounced on TB USA for five runs in the bottom of the fifth and left the Camelback Ranch complex Monday afternoon with a 5-3 victory and the championship at the PG West MLK Championship-Underclass.

Jakob Berger broke the tie with a one-out solo home run, Jesse Pierce followed with a single, and then came in to score on another single off the bat of Wade Elliott; Elliott, in turn, was chased home when Blake Adams delivered a run-scoring, ground-rule double. That 2-2 knot was suddenly a 5-2 Sticks lead, which proved to be enough.

“It has basically been ‘championship or bust’ ever since we started a group message among the team,” Sticks Baseball Academy manager Chase Brewster told PG postgame. “The whole mood of coming out here was to try to bring home a championship and they were just incredible today. … They never lost focus; they were ready when it mattered.”

The Sticks totaled six hits in the win and Pierce and Elliott – batting 1-2 at the top of the order – were responsible for four of them; Pierce had a pair of singles and scored twice, and Elliot doubled, singled, drove in a run and scored a pair.

The Sticks’ Cason Tollett, a 2019 catcher/first baseman from Little Rock, Ark., who is ranked No. 221 nationally and has committed to Arkansas, was named the tournament’s Most Valuable Player; he finished 7-for-16 (.438) with four doubles, eight RBI and two stolen bases.

Kale Davis, the Sticks’ 6-foot-4, 210-pound 2019 right-hander from Oklahoma City who is ranked No. 221 and committed to Oklahoma State, was the MV Pitcher. He threw seven, three-hit, shutout innings with nine strikeouts and one walk in Sticks BA’s 1-0 semifinal victory over the No. 3 Premier Baseball Futures (5-1-0) out of Texas.

“I’ve been to a bunch of big tournaments and I love Perfect Game, and I think this is one of their best tournaments,” Brewster said. “There’s not a ton of teams like some of their other tournaments, but there’s always such good top-end talent. …

“Just to be here in January and see that kind of talent, it makes the kids better for their (high school) season and it makes our program better; it’s well worth the trip.” 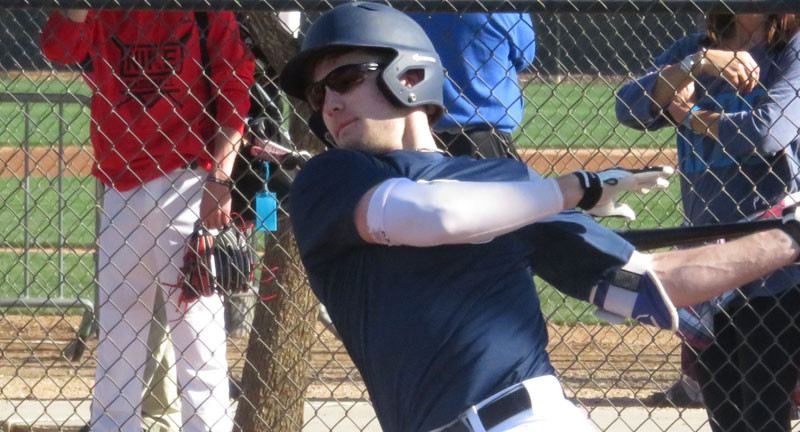 Photo: Perfect Game
GLENDALE, Ariz. – Teams got after it bright and early Friday morning at the Upperclass, Underclass and Freshman Perfect Game West MLK Championships, with games being played at both the Camelback Ranch and Maryvale Baseball Park spring training complexes here and in Phoenix, respectively.

It was a beautiful, 70-degree mid-January day in the Valley of the Sun, and with the “crack” created when a ball meets a wood bat and the “pop’ that resonates when the same ball finds a catcher’s mitt, there was no reason to doubt that it wouldn’t be long before big-league ballplayers were going through their spring training drills on those very same fields.

“I love Arizona and I love being out here at these baseball facilities and seeing all these guys,” top Pine Bluff, Ark., 2018 prospect Kaleb Hill said Friday, speaking from the White Sox side of the Camelback Ranch complex (the Sox share the complex with the Dodgers).

“You make friends when you do stuff like this and it’s been a long time since I’ve seen a lot of these guys,” he said. “Seeing them all again just puts a smile on my face, and we’re about to go out here and play baseball; there’s nothing wrong with that.”

No, there’s nothing wrong with that at all. Hill is here this weekend competing at the PG West MLK Championship-Upperclass with his teammates on the Little Rock, Ark.-based Sticks Baseball Academy squad, an outfit brimming with top talent.

The team is being coached this weekend by Dirk Kinney, a Kansas City-based area scout for the St. Louis Cardinals, whose territory includes Arkansas, Kansas and Missouri. He’s coached at the collegiate and high school levels in those states and got to know a lot of the guys that run the Arkansas Sticks Baseball Academy program in Little Rock, including Chase Brewster, the Director of Player Exposure.

Kinney is also very familiar with the players on this Sticks BA upperclass team, a collection of high school seniors who were brought together from near and far to build the roster. Ten of those spots are filled with Arkansas prep standouts, but there are also players from Texas, Arizona, New Mexico, New York, California and, of course, Kansas and Missouri.

“Brewster brought a lot of them together and then I sprinkled in some guys,” Kinney said Friday when asked how the team was assembled. “It’s a different game these days because you get to know these kids when they’re so much younger now (than in the past). You’re able to build a rapport with them and be able to put together what we hope is a pretty good squad.”

On paper, anyway this looks like a very good squad, even though some of the top guys listed on the official roster were not able to make the trip. But that roster does list 19 seniors that have signed with NCAA Division-I schools, including eight with the Arkansas Razorbacks.

No. 133-ranked outfielder Christian Franklin (Overland Park, Kan.), No. 251 left-hander Patrick Wicklander (San Jose, Calif.) and No. 255 right-hander Wade Beasley (Horatio, Ark.) are among the most highly ranked prospects from that group of future Razorbacks.

Other highly ranked guys decided to attend school and pursue their baseball careers elsewhere. No. 49-ranked outfielder Max Marusak (Amarillo, Texas) has signed with Texas Tech, No. 58 right-hander Jaden Hill with Louisiana State, No. 73 shortstop Sean Guilbe (Reading, Pa.) with Tennessee, No. 98 shortstop Jonathan Ornelas with Tennessee, No. 209 left-hander/outfielder Kaleb Hill with Mississippi and No. 264 outfielder P.J. Hilson with Alabama.

“It should be a fun bunch,” Kinney said of his group. “Chemistry is still a big part of it even though it’s a short-term event, but they’re a talented bunch and like I told them (Thursday), just go out there and play hard; that’s the only rule. Have fun and play hard. You can control how hard you play and everything else will take care of itself.”

The Sticks Baseball Academy looked like a team that will need to be reckoned with all weekend in their 11-2, six-inning tournament-opening victory over the Minnesota Blizzard Elite Blue 2018 early Friday afternoon.

“You expect to win, but with these guys I think it’s more about us all having fun with each other,” Kaleb Hill said. “That’s why we love seeing each other every time we come to a tournament like this.”

At 6-foot, 175-pounds, the athletic Marusak is an intriguing prospect; PG ranks him as the No. 90 overall (college, juco, high school) prospect in this year’s MLB June Amateur Draft. A center fielder who can also play the middle-infield, Marusak’s best tool is his speed.

He ran a 6.37-second 60-yard dash at the 2016 PG South Underclass Showcase in McKinney, Texas, and stole eight bases in six games at the PG WWBA World Championship in Jupiter, Fla., in October.

“It’s fun to get out here with a fun group of guys and really get it going,” Marusak said Friday. “We’re going to see some good competition and kind of get loosened up, and hopefully get ready for the high school season and hit it full-swing.”

Like every other highly regarded prospect on this Sticks Baseball Academy team or on any of the other 24 teams at the West MLK-Upperclass, Marusak is going to take advantage of the opportunity he has in front of him this weekend. Simply put, he’s going to continue his rapidly progressing baseball education by learning as much as he can from all the other players and coaches in attendance.

And how’s that done? Well, it really doesn’t require much more than just paying attention to one’s surroundings because in baseball there is always something new popping up that needs to be digested, absorbed and analyzed.

“These guys have a lot of talent, and you’re learning new things from them every game, every weekend,” Marusak said. “It’s fun to learn from the best coaches and the best players in the country.”

Kinney noted this is one of the few tournament events most of these guys will have the opportunity to participate in before the start of their high school seasons. He feels likes it’s a no-brainer for the position players – the hitters – to be here, while the pitchers need to show a little more caution.

“I’m a former pitcher, so I’m delicate with the arms,” he said. “You’ll have kids tell you they can go out and throw 100 (mph), well, they’re not going to throw 100 for us. The Cardinals aren’t hiring me to manage tomorrow if we win this thing … so you have to be really, really creative with the pitching at something like this.”

Just handling each player in an equitable manner is what’s most important to Kinney during this extended holiday weekend. He’s going to treat the kid that is still looking for the college that’s right for him the same way he treats the kid who has signed with a Southeastern Conference school. He has noticed, however, that the players themselves love getting on each other about it, even if they are just horsing around.

“There’s some (back-and-forth) but it’s all in fun,” Kaleb Hill said. “It’s good fun just talking about it, but at the end of the day we’re all good buddies. Even when we get to college or if we make it to the professional level, we’re all still going to be brothers in harmony.” That will definitely be the case for the eight guys who are likely to end up in Fayetteville, Ark., next fall.

There are other prospects on this Sticks roster in addition to Marusak that have every reason to be thinking about the upcoming MLB draft. Jaden Hill, who is not here this weekend, is ranked No. 94 in the overall draft prospect rankings, Guilbe is at No. 130 and Ornelas at No. 175. With the draft still six months away, PG is currently ranking only the top-250 prospects

Each one of them will say they’re not thinking that much about the draft right now, insisting their focus is on their final high school season, which will play itself out in the months leading up to the draft.

As far as this weekend is concerned, Kinney wants his players to continue to focus-in on the other players around them in the hope they will get a feel for the talent-level they’ll see on a regular basis in college or possibly in the minor leagues. And, he has told them, “It’s OK to get humbled.”

As Kaleb Hill was quick to point out early in Friday’s conversations with PG, this is Arizona in January, where the sun is shining, and the air is warm, where people are talking and breathing baseball and old friendships are being renewed.

“You’ll see a lot of guys that that you’ve played with or played against before, so it’s fun seeing all the guys from all across the country,” Marusak said, a wide smile etched across his face. “You don’t get to see them very often but when you do, it’s something special. It’s fun to be around a lot of talented players.”